First off, this is NOT a car blog, but if you bear with me, this gets filed as a tech/aviation tag. Trust me. 🙂

I grew up in a town owned by GM. Delco Electronics, at the time a wholly owned subsidiary of General Motors, was responsible for the largest percentage of the economy of the county. There was also a Chrysler plant in town, and combined with the GM money, the two of them were easily the source of 80% of every dollar spent within 50 miles of city center. There was a Ford plant to the south, but they weren’t anywhere near as big a deal as the GM/Chrysler plants.

That being said, we grew up primarily driving GMs, (a couple Chevy’s, a Buick, and a couple Saturns), but we did own one Chrysler (a ’77 Corboda – with Fine Corinthian Leather!) and a Ford product in a ’76 Mercury Montego.

I was never a Chevy >> Ford guy, but there were a ton of people I knew who’d rather push a Chevy than drive a Ford. We were not exactly affluent, so nearly all of our cars were used, and way past their prime when we got ’em.  The lack of exposure to “good” cars meant I was never any kind of car aficionado, but I did know how to handle a wrench. (Seriously, any car made in the 70’s more than a year old required extensive maintenance- and ours were 10 at a minimum.) So much so, that my first career was that of a mechanic (aircraft, of course.)

I did lean towards GM on most vehicles up to about 8 years ago. I didn’t like them killing the Saturn line (both from an engineering and consumer point of view), and I didn’t like the corporate entity, nor their handling of/ the need for the bailout.  As adults,  the wife and I have owned a LOT of cars. We’ve typically bought cheap used ones, and drove them for a few year until maintenance would be cost prohibitive, and bought something else.  A *lot* of those were Saturns. In the last few years we’ve expanded to some imports- Kia, VW, Audi. We’ve owned two Chryslers in Jeep Wrangler and a Jeep Cherokee, and two Fords: a brand new 1997 Ford Ranger and a 1992 Taurus Wagon (in 2003). The wagon was a P.O.S, but we paid $900 cash, and it was perfect for us at the time.

I never really found an institutional difference between the companies other than the idiosyncrasies of things like button placement, heater controls, radios, etc. Engines are engines, and however they scream about their differences, they are still internal combustion engines. One might be more powerful, one might be more efficient, but at the end of the day, when they’re 150,000 miles old, there’s not much you notice. Style could kill a car for us, but not really sell us. (Yes, the Pontiac Aztek was simply too ugly to consider, but a solid V6 in a less stylish car would win over a shiny sports car with a turd under the hood.)

However, there was one car I coveted. The Ford Mustang.

Most people that are Mustang people are Ford people. I am not a “Ford Guy ®”. I just like the Mustang. My affection for it goes, not to the car, but it’s namesake: The P51 Mustang.

They are the epitome of badass in a vehicle I can actually drive.  I will never be able to fly a F-16, or F-22, or even something as pedestrian (but still COMPLETELY badass) as an A-10. I doubt I’ll ever even try to get a cert for one of those. But a P-51? I can fly that bad boy.

Now, how does that relate to the new ride? See for yourself.

The styling and design harken back to the shape of the early plane models.  The slope of the roof, for example. Example of the sloped cockpit vs a P51A and a P51C.

As an added throwback, the shark mouth is built into the front end. (Granted, the shark mouth didn’t originate on the P-51’s, the Curtiss P-40 predated it, and possible German Stukas did it first…but the Mustang was occasionally seen with it, too. The shark mouth is more a WWII-aircraft-meme than a real P-51 thing.) Typical example of shark mouth as seen on a Curtiss P-40 Warhawk.

Now,  we’re established enough that I can afford to drive what I really want to, more or less. No I can’t buy a Bugatti, or even something “reasonable” in a supercar variety,  like an Audi R8… but the Mustang I can do.

There are guys that love their Camaros, or Corvettes- and on some grounds, sure, any Corvette should beat handily any similarly aged Mustang in almost any measure. Camaros are a close match, and are always neck-and-neck with Mustangs in whatever their currrent top-of-the-line models are, and fairly close head to head on similarly equipped cars.

However, since 1993, the Mustang has won the coolness factor, hands down. (1964-1974, the Mustang was just a cooler car, too….but 1975-1993, I will fully admit, the Camaro was the cooler looking car. Many of us Mustang guys refuse to acknowledge dropping a V8 into a Ford Escort makes it a Mustang.)

The Camaro’s only real claim was that it was Chevy’s answer to the Mustang. Playing Catch-Up, even if you win occasionally, is never the same as the original.  Pony wins the heritage battle in my mind,

A few years ago, I bought my first one- a seasoned 2008 GT (with 100K+ miles). Molly,  Still, at  315HP,  boy did she move.  She ran great…the only real problems with her was interior was showing her age after a couple years and 40K miles…(I really liked driving her.)

This past Christmas, a deal fell into my lap in a massive discount through my employer, and I seriously considered upgrading. When I went in and found out what I could get, hoo boy…it was all over.  There was this Cherry Red, Black Accent, 435HP California Special staring at me, and it was going to cost me about half of sticker with my trade and discount.

Now you can bask in her glory, too. 🙂 The pic below links to her photo album. 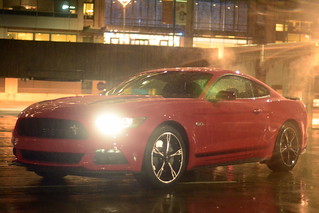